skip to main | skip to sidebar

Never Put Off Till Tomorrow What You Can Do Today

Once again, way too long between blog posts, but that's not to say that I haven't been following the many blogs and admiring the work all you guys are doing out there.

Model railways as a hobby, to me has always been a long term journey, not just a short term destination, it's something that typically does happen over a long period of time, especially if an ambitious or sizable layout is part of it, or building up a collection of super detailed hand built or modified RTR stock.

It's also a hobby where lets face it, the availability of what you want rolling stock and motive power wise is not always available, or is on the horizon, but a long time in coming, and so it can take a long time to gather those pieces that fulfill the time period and location that we choose to base our layouts or collections on.

I was reasonably "into" my trains in my teen years during the 80's, and built up a nice little collection of NSWGR based items, mainly 60's and 70's era stuff in general as the current Candy colours, fiyr letter code and no brake van era didn't interest me as much, even though it's what I saw roll past whilst standing at Kogarah or Allawah railway station on my way too and from school each day. Thankfully there were still plenty of dirty old Tuscan/Indian Red 44's, 421's and 422's hauling the South Coast passenger services past to keep me happy at the time.

My late teens, twenties and most of my thirties saw other hobbies and priorities take over, but in January 2008 my interest in my trains was rekindled after opening the box containing my teenage years train collection, after not being opened for the best part of twenty years. They were laid out on the sideboard and pics taken, and that was it, I was hooked again. 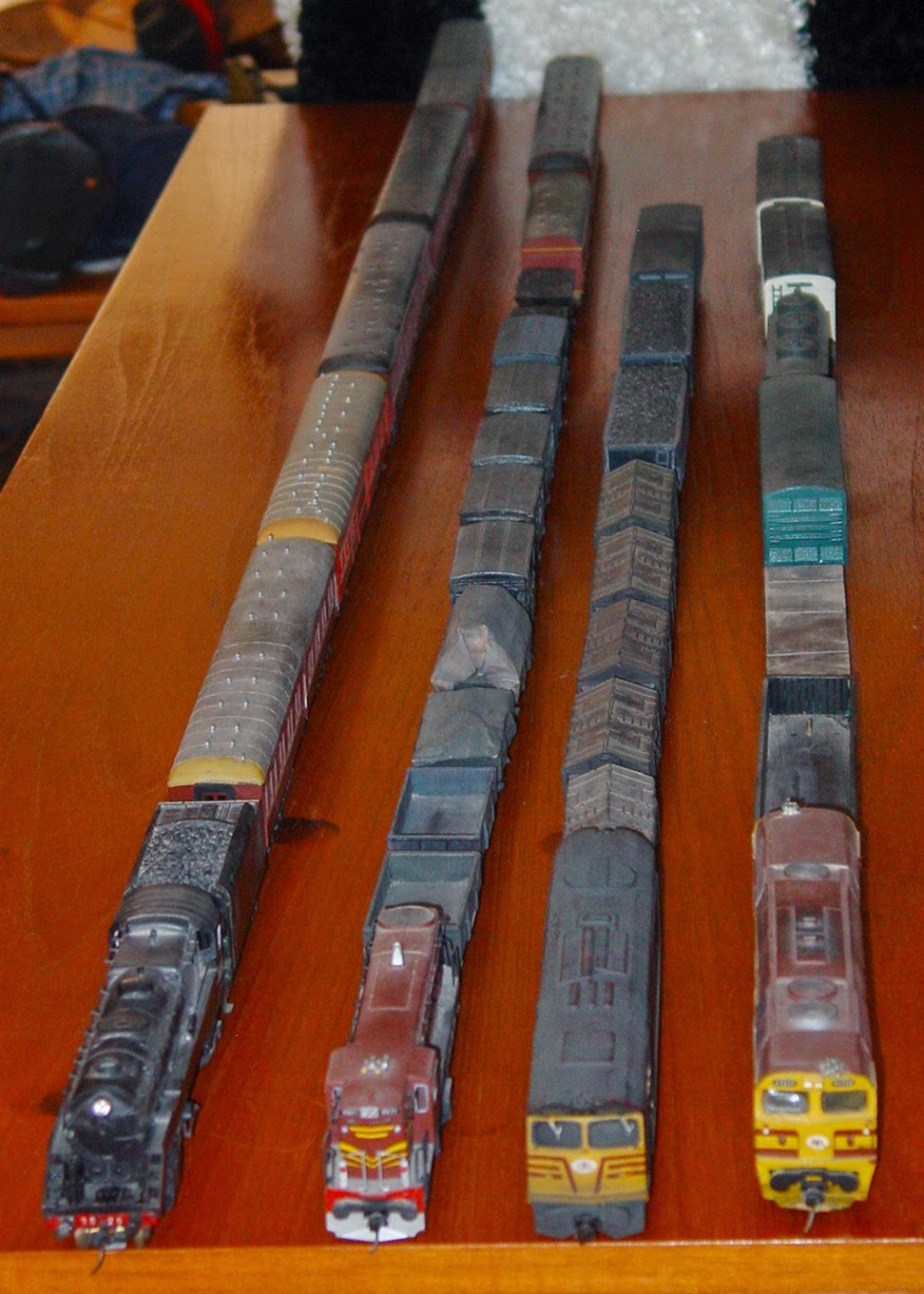 Not long after that I started buying the Australian Model Railway Magazine again, and was happy to see that NSW prototype models like the Austrains 80 and 422 Class, and more impressively the Trainorama 44 Class were available, the 44 in particular showing 1980's "brass like" detail at a very affordable price. One was very shortly afterwards purchased!

Followers of this blog will then know that gradually I figured out that Gunnedah was what my long term goal was as far as a layout went, and the 60's era was what appealed with a mix of late steam and early diesels to feature.

Progress was slow or non existent on beginning the actual layout, but, I continued to collect items whilst other life priorities came first, but all the time knowing that there was no hurry, I was still in my late thirties, and had plenty of time to "get around" to building that dream layout.

Fast forward to today, having just turned 43 years old on the 29th of August, and whilst I don't like to use this forum as a conduit for less than happy news, as hobbies should be about enjoyment and fun, the news is not all that happy. In January this year, after having twelve months or so of a weakening left shoulder and arm initially, then some rather disturbing muscle mass and dexterity loss, I was finally diagnosed with Motor Nerone Disease, otherwise knows more popularly in the media as ALS (Amyotrophic Lateral Sclerosis), and the reason for the Ice Bucket Challenge seen in the media recently, which is designed to raise awareness and funds for research into this at the moment incurable disease.

To this point I've lost most of the use of my left arm strength wise, now being barely able to lift it on its own let alone with anything in hand, and my hand has lost about fifty percent of dexterity in it, with my fingers gradually losing the ability to grip and hold things, and unable to straighten them up properly. Because of this any actual modeling has become quite difficult, soldering near impossible so building my own track and points in so longer possible, and in general any task which involves both hands is just not possible.

I'm not whinging, and not defeated in general, but with the progress of this condition now beginning in my right shoulder as well, it's obvious that in time to come it will follow the left and gradually become less than useful. From there who knows, it's hard to predict what will happen next, but in general it's likely it will progress to the legs, and long term it will take away the ability to talk, eat, and breath, although it doesn't effect the brain to any degree, so you get all the fun of being fully aware of what's going on well past the point of being able to communicate.

Thankfully for now I can still work, and overall function ok, am not in pain, and have a wonderful wife and daughter who are always there to help when I need it. But the reality is, as far as Gunnedah goes, it isn't going to happen now. I'm going to sell off a lot of stuff, but will keep some selected items and hopefully will be able to throw something small together in the coming months to be able to at least give some things a small run.

Again I hate to make this an unhappy post, but I guess my positive message is don't put things off any longer than necessary, enjoy today, and try to make sure that you don't waste time, because you just never know when it will run short.

Darren
This train layout was Darren's life passion. One of many. Darren passed away from a Respirator attack, caused by MND on the 20th of August 2018.

Links of Interest and Inspiration